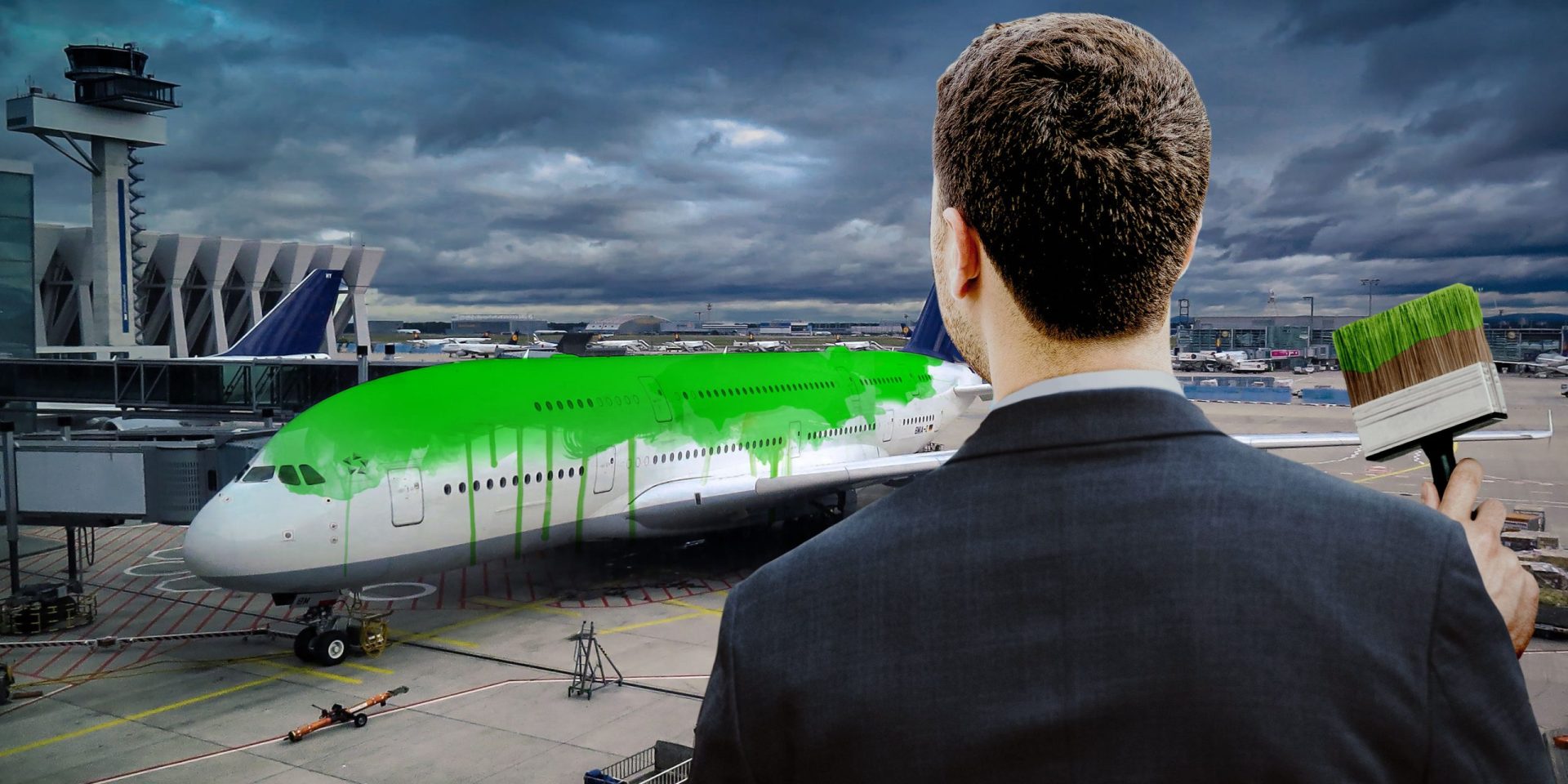 For decades we have witnessed massive growth rates in aviation without any meaningful attempt from neither industry nor government to deal with it’s damaging climate impact. The short pause through Covid was directly followed by massive and unconditional bailouts from governments. As climate demands increase globally, the aviation sector is redoubling its efforts to legitimize its growth rates. How likely is it to decarbonize aviation through technological innovations? Are the current plans in line with the Paris Agreement’s 1.5C limit? How can one distinguish between realistic plans and greenwashing?

On December 1st 2021 Stay Grounded organised the bi-lingual webinar „Is the industry greenwashing aviation? – What we should know about false solutions and unmet promises“. The webinar was part of the current Stay Grounded campaign against Greenwashing and held in contrast to the World Aviation Festival which convened at the same time. It was co-hosted by Biofuelwatch and the Global Forest Coalition.

The expert panel combined a wide range of scientific and civil society perspectives on the topic of Greenwashing in aviation and whether the technological promises are as impactful as portrayed.

Tone Smith, ecological economist and part of a CSSN research study group presented their draft working paper on an integrated framework to assess greenwashing. In their definition they describe greenwashing as “umbrella term for a variety of misleading communications and practices that intentionally or not, induce false positive perceptions of an organization’s environmental performance.“ Tones stressed that the actors using greenwashing practices can be any organisation or institution, including governements and that their assessment of greenwashing practices includes also social as well as environmental aspects. The framework identifies many different types of greenwashing, from misleading symbols via dubious certification to hidden trade-offs or even outright lies. As a tool the framework aims to be very helpful for identifying and pin-pointing the various greenwashing strategies of aviation and other fossil-fuel burning industries on a scientific basis and develop counter strategies based on this.

Finlay Asher, a former aerospace engineer, now active in the climate justice movement and co-founder of Safe Landing presented five new fact sheets on the greenwashing of aviation, published recently by the Stay Grounded Network. In his overview he stressed that within the limited timeframe we have to tackle the climate crisis and the limited amount of renewable energy available, the scenarios towards „net zero“ promoted by the aviation industry are highly unrealistic and have many problematic side effects. Where efficiency improvements historically lead to even more emissions due to rebound-effects, elctric flight will only be viable for very small airplanes that fly short distances, which could mostly be replaced by grounded transport. Hydrogen airplanes will require a lot of new infrastructure and its realisation is still very far from commercial scale. Biofuels are constrained by the limited availability of resources (also when it comes to using waste such as used cooking oil) and by their negative social impacts. And finally, Synthetic Electro-Fuels (e-fuels or power to liquid) require a huge amount of renewable energy that doesn‘t exist yet and when implemented will compete with other applications.

Inés Franceschelli a researcher and campaigner at HEÑOI – study center for the promotion of democracy, human rights and socio-environmental sustainability, presented their new case study on the Omega Green project, a biofuel refinery being built in Paraguay (soon to be published). She laid out how the implementation of the mega project is dominated by interest and profits of big foreign investors and businesses, while threatening local ecosystems and impoverishing and sickening the peasant and indigenous population. Inés also pointed out that biofuels and especially biofuels for aviation satisfy the demand of a global minority, while the demand in Paraguay itself is extremely low. In short she said „Omega Green, like all extractive projects, brings more destruction, pain and extinction to our people.“

Abhilasha Fullonton research asscociate at the Tyndal Centre for Climate research shared market based solutions for reducing aviation emissions such as the European Emission Trading System (EU-ETS) and the offsetting based programme CORSIA (Carbon Offsetting and Reduction Scheeme for International Aviation). In her input she analysed various shortfalls and loopholes of those programs such as free allowances, voluntary phases and double counting of offsets. She pointed out that historically the industry has favored market-based measures because they always made it cheaper to pollute than to decarbonise. Especially for CORSIA, she stressed that while there are some criteria to address logistical and operational questions, they are entirely ignoring the socio-cultural impacts of offsets and the kind of destruction they can cause especially in the Global South, and other places where we already have immense socio-economic inequities. The question of how to implement offsets best leaves aside the question of who actually benefits from it, which should be put first. She concluded that marketbased mechanisms at the moment are not really promoting mitigation because they fail to address very key environmental and social problems.

Stefan Gössling professor at Linnaeus and Lund University and long-term researcher on the intersection of tourism, transport and sustainability started his input with a look on the consumer citizen, who, as an individual, is unlikely to abstain from flying if everyone else doesn‘t, but as a citizen, may support policies that will make flying harder for everyone. This brought him to the dimension of change which he sees as a combination of a strong demand reduction, technology change and a change of social norms. Within this mix, there is then a set of different policies (regulatory, marketbased and soft policies) to support this transition. As for the technological development he named high feed-in quota for SAF as important, but saw the central challenge in reducing demand, especially the demand of the frequent flyers where taxation can be an important part of the puzzle.

Summing up the major points of the webinar we can conclude that the promises of currently discussed technical solutions as well as the marketbased mechanisms leading us to zero emission flying in the time needed to stay below the 1.5° C limit is very questionable. While some new technologies to decarbonize aviation are interesting and may be useful in a minority of overall cases, such advances are overshadowed by the industry’s plans for uninhibited growth. The need to reduce aviation, meaning the need to reduce demand is very obvious. A mix of different policies is needed to reach this goal and a great part of it is related to bigger change of social norms and economic systems. But while continuing to work towards this change, it is important to name and critise the industry‘s and governement’s false green solutions. We hope the insights from this webinar and our work on greenwashing can be helpful for this.